On Friday, October 22, 2021, the virtual launch of the first edition of the Panorama of Higher Education in the countries of the Network of Latin American and Caribbean Associations of Private Universities (Realcup) took place, a contribution to the knowledge of the university system in the region with information on the countries that make up this network: Argentina, Chile, Mexico, Panama, Paraguay, Peru, Brazil and Nicaragua.

Semesp (Sindicato dos Estabelecimentos de Ensino no Estado de Sao Paulo) participated in this unprecedented work, which aims to gather relevant information on higher education provided by the network of private university associations in Latin America and the Caribbean.

In the foreword of the publication, Ana Capilla, Director of Education and Science of the Organization of Ibero-American States (OEI), emphasizes that this panorama allows a first approach to the reality of the context in order to advance in its analysis in the future. “Having this document at our disposal broadens the diagnosis of higher education in Ibero-America, and represents one more source of knowledge to continue on the path of continuous improvement of its quality, and for this we must congratulate its promoters.”

José Antonio Quinteiro, program coordinator of UNESCO IESALC, who participated in the opening ceremony, applauded the initiative and highlighted the importance of having “a work that not only gathers data that dimension higher education (HE) under private management, but also under public management; the former being a neglected sector in terms of data and descriptive analysis, despite the weight it has over the total student enrollment in our region.” All this “hard data” can be processed and analyzed, thus allowing the formulation of better informed public policies that will respond more efficiently to the needs of the citizens, he added. Read here José Antonio Quinteiro’s speech during the Launching. 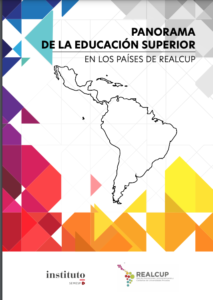 The publication, available free of charge and online, is divided into two parts: the first compiles general data for each country, with information on the number of universities, courses offered, enrollment, teachers, most sought-after courses, among others. The second part of the document focuses on information specific to REALCUP associations. Seven representative higher education entities participated in this section: CRUP (Argentina), SEMESP (Brazil), CUP (Chile), FIMPES (Mexico), AUPPA (Panama), APUP (Paraguay) and FIPES (Peru). The numbers are about the HEIs associated with the entities and their representativeness in terms of enrollment, teachers and other information related to the private sector.

The presentation ceremony was also attended by the president of Realcup, Héctor Sauret, its academic secretary, Ariana de Vicenzi, and by the presidents of the network’s member associations.

Download the document Overview of Higher Education in Realcup countries (available in Spanish).