The webinar Racism in the Academy: Global perspectives on multiple forms of racism and struggles for equity revealed how higher education systems legitimate and reproduce racism while simultaneously attempting to challenge and overcome it. Professor Daniel Mato (Universidad Nacional de Tres de Febrero, Argentina) and Professor Rajani Naidoo (University of Bath, UK), two leading scholars of higher education who have also championed initiatives to bring about positive change across a range of international contexts, discussed how racism manifests itself in a variety of visible and invisible forms, showing interconnectedness across geographic boundaries and cultures. “Racism is both an ideology and a regime […]
©
22 November, 2021

The webinar Racism in the Academy: Global perspectives on multiple forms of racism and struggles for equity revealed how higher education systems legitimate and reproduce racism while simultaneously attempting to challenge and overcome it.

Professor Daniel Mato (Universidad Nacional de Tres de Febrero, Argentina) and Professor Rajani Naidoo (University of Bath, UK), two leading scholars of higher education who have also championed initiatives to bring about positive change across a range of international contexts, discussed how racism manifests itself in a variety of visible and invisible forms, showing interconnectedness across geographic boundaries and cultures.

“Racism is both an ideology and a regime of power that is constitutive of the Modern world and every American society, involving its political and economic organization. In Latin American societies, racism has been so naturalized that most of the population often limits the use of the concept of racism to explicit facts of racial discrimination”, stated Mato.

In Latin America, indigenous peoples have not only been affected through racial discrimination but have also endured every form of racism since the very beginning of the European invasion.

In the case of South Africa, Professor Naidoo said that there is a deep link between racism and predatory forms of capitalism: “Apartheid in South Africa was very useful to the big multi-national corporations, because the government created laws which allowed the companies to treat workers like slaves. Afterwards the same corporations put pressure on the government to end apartheid because it was no longer working in the interests of the companies”. 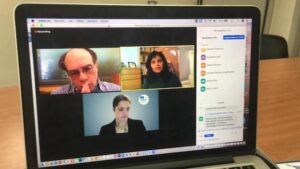 Photo (from left to right, from top to bottom): Daniel Mato, Rajani Naidoo and Emma Sabzalieva.

Higher education institutions: part of the problem and the solution

In Latin American countries, economic disadvantages and entrance exams are outstanding problems for Afro-descendant and indigenous people from gaining entry and graduating in higher education. Afro-descendant and indigenous people also have to deal with linguistic differences and educational disadvantages originating in the lower quality of their primary and secondary education, especially for those in rural communities.

Another form of racism is the exclusion in the curriculum of the worldviews, histories, languages, epistemologies, knowledge systems, and learning modalities of Afro-descendant and indigenous peoples; as well as the scarcity or even the absence of teachers from these groups.

“Since the colonial period, higher education has played a significant role in the naturalization and reproduction of racism. Higher education can and should actively engage in democratizing our societies, contributing to repairing the harms of the past and the inequities of the present”, said Professor Mato.

In South Africa, universities reproduce inequality by rewarding the cultural capital associated with dominant white and middle-class communities. “This narrow conception has been deployed to represent the culture of black working class students as deficient and unsuccessful without fully accounting for the complex histories of racial domination that influence their social positions”, noted Naidoo.

The pandemic has aggravated the inequalities and has worsened the reality of already vulnerable communities, whose poor living conditions are resulting from centuries of racism and continued violations of their human rights.

“Messages like washing your hands” can be a pipe dream when you have no access to running water, ‘staying at home’ can be a folly when you live in an overcrowded urban or peri-urban slum, and strictly unnecessary when you live in the middle of the mountains, evidenced Professor Mato.

He added that health policies and institutions and professional training programs often ignore or dismiss the ways of life and knowledge of these communities in various fields including food production techniques, nutrition patterns, management of plant species and their therapeutic applications.

“I have felt very proud that universities including my own have supported local communities and developed important innovation in responding to the COVID-19 pandemic. At the same time, existing inequalities were exacerbated by the pandemic”, said Naidoo.

She pointed out the somewhat ambiguous role of universities in relation to COVID vaccines and the global good: “Researchers have been crucial in the development of COVID-19 vaccines but universities have had to partner with large pharmaceutical corporations for its production and distribution, leading to difficult tensions in the profit versus the public interest motive. So we now have a situation of vaccine apartheid where poor communities in low-income countries do not have access to the vaccines. Universities need to think about how to use research that is publicly funded to protect and benefit humanity into the future”.

The webinar, was hosted by the UNESCO International Institute for Higher Education in Latin America and the Caribbean (IESALC), the University of Bath, UK, and the Universidad Nacional de Tres de Febrero (UNTREF), Argentina.

Daniel Mato is Principal Researcher, National Council for Scientific and Technical Research – (CONICET), and Director of UNESCO Chair in Higher Education and Indigenous and Afro-descendant Peoples in Latin America, Universidad Nacional de Tres de Febrero (UNTREF), Argentina. Professor Mato chairs the Initiative for the Eradication of Racism in Higher Education in Latin America. He has published extensively in the fields of cultural diversity, racism and higher education, and culture, communication and social transformation.

Rajani Naidoo is UNESCO Chair in Higher Education Management, Director of the International Centre for Higher Education Management and Head of the Race Equality Taskforce at the University of Bath, UK. Before this, she contributed to an alternative higher education institution that was set up to act as a model for transformation in post-apartheid South Africa. Her publications and research projects focus on the escalation of competition, audit and bureaucracy in higher education, and the contribution of universities to inclusive development and social justice.

For further learning and reflection on race equality in higher education, participants are encouraged to access and share these readings/recordings:

University of Bath (2021) Where are we going to? Whither Higher Education? A conversation between Margaret Heffernan and Rajani Naidoo https://www.youtube.com/watch?v=Ynsl-42DQs8

Photo of Rodnae Production on Pexels.