In Latin America and the Caribbean only 38 students out of every 100 stay in the region to pursue their higher education studies, while the rest go to Western Europe or North America for that purpose, commented UNESCO IESALC Director Francesc Pedró, during his introductory remarks at the III Virtual Forum “The New Regional Agreement: challenges and opportunities for its implementation”.

To change what he described as a “painful figure”, he pointed out the need to ensure that the end user has a truthful mechanism of detailed information about their degree based on requirements shared throughout the region. In this regard, he said that it is urgent that the New Regional Convention enters into force. At the moment Peru and Grenada are the only signatory states that have ratified it and at least two more would be needed for it to become a legally binding instrument.

“We need to build academic networks to recover a mechanism of effort for a common space around science and research,” said Pedró, while announcing the creation of a secretariat to support the countries in harmonizing processes to ensure transparency in relation to degrees and compliance with shared requirements throughout the region in terms of quality assurance in higher education.

José Antonio Quinteiro, program coordinator of UNESCO IESALC, moderated the virtual meeting with questions aimed at unveiling the difficulty of operationalizing the New Regional Agreement for the recognition of studies, degrees and diplomas in higher education in the region, to analyze some international scenarios regarding the circulation of qualified talent that indicate the urgent need to ratify this regional instrument, as well as to gauge the opinion of the panelists on the possible and consensual ways to implement it, particularly in a region characterized by advances and regressions in this area and a great heterogeneity of its higher education systems. 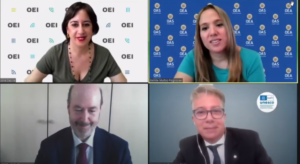 Ana Capilla, director of Higher Education and Science of the Organization of Ibero-American States for Education, Science and Culture (OEI), stressed the importance of betting on a strategic process based on stimuli for regional integration and the progress achieved in the bilateral agreements already in place between countries in terms of academic mobility, as well as the need to leave protectionist tendencies aside. For the director of the OEI, higher education institutions must transmit confidence and to this end, her organization is working with Ibero-American quality agencies to gather the procedures, indicators and standards they use in the evaluation and external quality assurance in higher education. She recognized the importance of the New Regional Convention and its top-down legitimization process, pointing out its necessary articulation with other bottom-up initiatives that are also being built in the region. Among the latter, she highlighted the mobility tool designed by the OEI and the European Foundation Society and Education (EFSE) to facilitate the recognition of studies which is presented in the report “Ibero-American University 2030 on the move: a proposal for academic mobility” (available in Spanish and Portuguese). This initiative of the OEI and EFSE counted on the contribution of a group of Ibero-American experts in which IESALC-UNESCO participated.

The Director of Social Inclusion of the Organization of American States (OAS), Betilde Muñoz-Pogossian, explained the importance of having an instrument of regional integration that generates work possibilities, connections between countries and recognition of learning for the populations of human mobility who, in her opinion, would be the great beneficiaries of the ratification of the New Regional Convention. It is of utmost importance to work jointly between civil society organizations and political spheres and to rethink successful strategies and incentives that can revitalize this conversation among the main actors, she said.

For the Secretary General of the Ibero-American University Council (CUIB) and Director of the Ibero-American Knowledge Space at the Ibero-American General Secretariat (SEGIB), Félix García-Lausín, work must be done on academic and political coordination and mutual trust in higher education systems. It is important to advance in academic recognition, ensuring quality, and then to work on the empowerment of professional practice that favors the circulation of talent between countries in the region. He recalled that, as a result of the HIV/AIDS pandemic, different feelings have arisen: on the one hand, countries are afraid of losing their capacity to provide for their population, but on the other hand, they have placed value on international cooperation. He affirmed that the existing instruments for academic mobility, such as the Iberoamerican Campus, must collaborate with each other, be aligned and work together to strengthen and promote academic mobility in the region. Finally, according to Félix García-Lausín, a broad discourse has been established in the region that is much more favorable to the application and implementation of recognition agreements of this type, conditions that did not exist in 1974 when the first regional agreement on the subject -under the leadership of UNESCO- was signed.

The experts at this III Virtual Forum were in favor of the ratification of the New Regional Convention and recognized it as a driving force for academic mobility, particularly essential in the current context of the migratory crisis that the region is going through and which has impacted its educational systems.