Women made up a slightly larger share (53%) of graduates with Bachelor’s and Master’s degrees in 2014, but at the doctoral level the share of female graduates drops to 44% Just 30% of the world’s university researchers are women Women are overrepresented among teaching staff at lower education levels: in 2018, women represented 43% of teachers in tertiary education, compared to 66% and 54% in primary and secondary education, respectively The Report recommends to Higher Education Institutions that they undertake to be the platform for increased female leadership If women constitute the majority of undergraduates, why are they a minority among […]
©
8 March, 2021

If women constitute the majority of undergraduates, why are they a minority among lecturers, senior lecturers, and professors? Why are there fewer women researchers and published authors? With more women than men studying and graduating, what is stopping highly capable women from taking half the seats at the top table?

These questions are raised in the Report Women in higher education: has the female advantage put an end to gender inequalities? launched on March 8 by the UNESCO International Institute for Higher Education in Latin America and the Caribbean (IESALC) with the objective of encouraging policy debate on the topic and contribute to the 2021 International Women´s Day celebrations.

The document reveals a rapid increase in women’s educational attainment, which has tripled globally between 1995 and 2018 in female enrolment in higher education: in 74% of the countries with data as well as in all regions, women are overrepresented, except for Central and Southern Asia, where there is parity, and sub-Saharan Africa, where men are overrepresented with 73 female students enrolled for every 100 males.

Regardless of this increase, there are concerns about gender equality regarding recruitment, retainment, and promotion of women in universities. Also, in reference to the inequalities in female enrollment in STEM careers, the authors point out that cultural structure and stereotypes have helped identify careers as female or male, therefore increasing the gap. In over two-thirds of countries, only less than a quarter of the students of engineering, manufacturing and construction or ICT are female (OECD, 2017).

Women hit against glass ceilings professionally when seeking to advance their access to leadership positions in HE. UNESCO IESALC reports that in 2020 only 18% of public universities in Latin America have women rectors. In the case of European universities 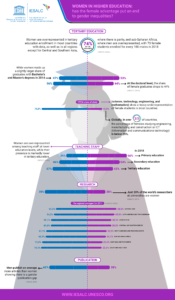 , according to the European University Association (EUA, 2020), 15% of rectors of member universities across 48 countries were female, compared to 85% being male, and 20 countries did not have any female rectors.

When it comes to compensation there are also wage gaps. In the United States, 57% of higher education students are women, but women’s unadjusted average earnings are 78% of those of men. In 26 out of the former 28 EU countries, there are more women than men in higher education institutions, but women’s unadjusted average earnings are lower than men’s in all 28 countries.

On research performance, in 2020 just 30% of the world’s researchers at universities were women. Regardless of the growing number of women enrolling in universities, many opt out at the higher levels, which are normally required for a research career. According to UNESCO reports that, of the 53% of graduates with Bachelor’s and Master’s degrees in 2014, at the doctoral level, the share of female graduates drops to 44%.

The Report also raises the issue of the gender publication gap, with men publishing on average more articles than women: 62% vs 38% (Elsevier, 2020), a situation exacerbated by the COVID-19 pandemic, for additional lockdown and child and elderly care.

The Report concludes that, despite the fact that women and girls constitute half of the world’s population, their underrepresentation in various aspects is evident compared to the male population in higher education institutions, is evident in various areas. “In light of this, higher education institutions should take stock of this situation and serve as the ideal platform for encouraging women to become leaders, ultimately taking advantage of increased female leadership”.

Planning for closing the gender gaps

This document is a call to action for a higher education reform, aligned with the implementation of the Sustainable Development Goal 5 on Gender Equality of the 2030 Agenda for Sustainable Development. “Such research provides important and timely evidence from which to develop targeted policies and programs to address the needs of women in higher education – and to implement reforms that are genuinely inclusive and gender responsive.”, as UNESCO Assistant Director General, Stefania Giannini, states in the foreword.

The recommendations directed to governments and schools, target the commencement of decreased discrimination against women in education, for example, by combating the stereotypes. They also speak to the implementation of policy interventions to increase the chances of today’s female generations to avoid facing the disadvantages that their parents suffered, like quotas in tertiary education for students belonging to vulnerable groups, expansion of scholarships and cash transfers, as well as free access to primary education, among others.

More specific recommendations addressed to universities and governments include: collection and sharing of data on female participation in HE; implementation of diversity policies and programs to increase women’s full participation in HE; mentorship and empowerment of women to reach leadership positions. They also address the prevention of and response to violence against women; initiatives and programs to help students make informed choices, free of gender bias, about their future fields of study and career and also to develop strategies to enhance female participation in traditionally male-dominated careers including career orientation to deconstruct false images of STEM and their biased connection to gender stereotypes.

Read the news Has the female advantage put an end to gender inequalities? a report and a debate seek to provide an answer.